Past and Completed Projects 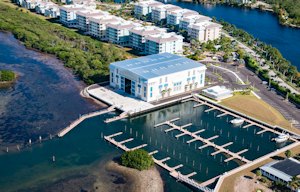 One Particular Harbour
Bradenton, Florida
Coastal Marina Management has been onboard as consultants during each phase of construction and we are presently providing management services for this incredible facility on Florida's southwestern coast.

The Texas Center Console Shootout, Presented by Pelagic, was one of the most popular in the Texas summer tournament season. The good old-fashioned laid-back fishing tournament with minimal rules and hassles made for maximum fun, and offered cash prizes for the largest dolphin, tuna and wahoo caught from center console boats. In addition to the three gamefish divisions, there wasca bonus swordfish category that was separate from the general tournament.

LaPrade's Marina
03/2017 - 11/2017
LaPrade's Marina is a historically significant operation located on Lake Burton in the mountains of Rabun County Georgia. The marina had changed ownership and was again on the market when Coastal Marina Management was asked to assume management of the operation. Respecting the importance of its history, while providing a quality experience focused on attention to detail, Coastal Marina Management assisted LaPrade's and the marina confidently stepped forward to its next chapter and new owner in late 2017.

Skull Creek Marina
2013-2016
Managed marina operations and Common Area during bank ownership transition. Worked on improving the infrastructure of the marina, along with revitalization projects for impending sale. This public marina features a number of top-shelf amenities including state of the art concrete floating docks, dockage for vessels up to 200 feet in length, 24-hour privacy and security, a fuel dock, and immediate access to deep water. Skull Creek Marina is located inside the beautiful Hilton Head Plantation, and within driving range of the Savannah/Hilton Head airport.

Romar Marina
2012
In August 2012, Coastal Marina Management was awarded the management assignment for Romar Harbor Marina. The project included responsibility for strategic planning, marketing and day-to-day operations of the facility until the facility sold in October of that same year.

Bay Point Invitational Billfish Tournament
1984-2011
Envisioned nationally renowned tournament in 1984 and managed with Bill Spann throughout its duration until Bill's retirement in 2005. First event of its kind on the Gulf Coast in terms of large high stakes modern Billfish Tournaments. Televised live on CSS sports 5 years in a row. Holds State record for the two heaviest Blue Marlin caught in Florida.