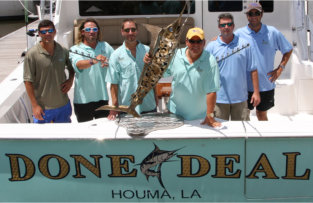 Done Deal, the 2012 champion repeated their winning performance in 2013 to once again establish their dominance.
< more success stories

It took almost ten years to develop The Gulf Coast Triple Crown, but it was Sonny Middleton who envisioned the original idea of linking the major billfish tournaments in a championship series to promote offshore big game sport fishing and crown an overall "best of the best" . None of us at CMM could have envisioned how popular the series would become when we decided to push the idea toward reality.

We saw the GCTC introduced for the first time in 2011 at Bobby Carter's Mississippi Gulf Coast Billfish Classic at the popular Isle of Capri Casino in Biloxi. Reaction from anglers and crew was immediate and overwhelmingly positive, and the GCTC remains the most coveted trophy series on the Gulf Coast.